I should be travelling to Düsseldorf in a few weeks, but in the current Covid-19 infected climate that’s not going to happen. This trip was to celebrate my birthday, which now I’ll be celebrating in lockdown at home instead. Things have changed so fast, and it really makes you appreciate things that you previously wouldn’t have thought twice about – small things like going out to dinner, and slightly bigger things like exploring Germany for a week for your birthday.

I’ve been fascinated with Germany since my first visit, and if I wasn’t Irish, I think my next most preferable nationality would be German, followed by Dutch. Düsseldorf was supposed to be our base for a week in Germany in April, and we had a few more cities on the list we were also going to visit, namely Mönchengladbach, Duisburg, Essen, and maybe Dortmund. We have traveled to Düsseldorf previously, in 2016, and loved it so much we always said we would go back. This year was supposed to be our chance, but it is not to be, at least in the first half of the year.

The city of Düsseldorf is compact, and in some ways reminds me of Cork, easily explorable for the most part on foot. I loved walking around the Alt Stadt (old town) on our first visit, sampling the local beers and food, and taking in the atmosphere, especially on Wednesday, when it’s traditional to go for drinks after work. Düsseldorf’s main city park, the Hofgarten, is something not to be missed, as is the Rheinpromenade, the promenade which runs along the River Rhine in the old town, and is lined with bars and restaurants. From the Rheinpromenade you will find it hard to miss the Rheinturm (Rhine Tower), this huge structure is visible from most anywhere on the promenade. At the top, there is an observation deck and a revolving restaurant which serves excellent food (expect to pay for it though), from where you can see excellent views of the city and beyond. Düsseldorf is also the home of one of my favorite varieties of German beer – ‘Altbier’, named for the old style of brewing used in the production process. Altbier is native to this part of Germany, and I highly recommend a few pints of ‘Frankenheim Alt’ if you find yourself in this region. I’ve been buying this beer online frequently since I first visited Düsseldorf, but there’s nothing like the taste of it while actually there. Hopefully we ‘flatten the curve’ enough for me to make a trip this year! For now I’ll need to satisfy myself with this picture from my 2016 trip. 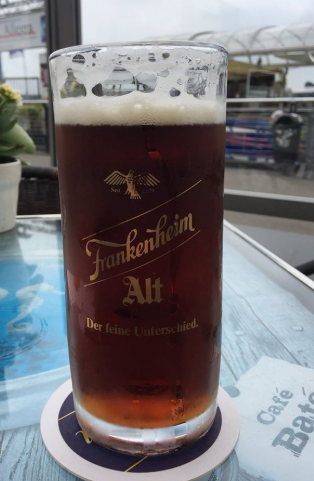 We had also planned to go back to Holland and visit Amsterdam (again!), Utrecht and Maastricht in May, but that’s also not likely now. At the moment I’m satisfying my wanderlust by following lots of European travel Instagrammers, and using Google Maps and Earth to plan our next trips.

On the plus side of being in lockdown for a few weeks, I’ve pulled out the electric guitar again and found a suitable online course. Hopefully this time I have the patience to stick with it. I’m also studying for my ‘Amazon Web Services – Certified Solutions Architect’ exam, and playing around with Amazon’s managed machine learning service, AWS Sagemaker (expect a post on this later). I’ve also ordered a Dutch language audio course, so I can try speaking it on my next trip to Holland. Maybe a bonus of the lockdown will be brushing up on old skills, or learning new ones. We’re staying positive anyway and viewing this as an opportunity to learn.